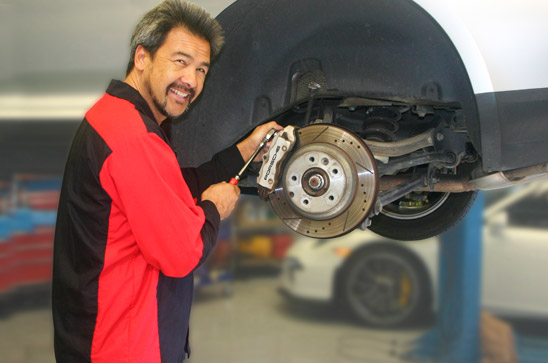 Master cylinders are divided into two separate hydraulic circuits, with each having its own fluid reservoir and piston. This is a safety requirement so that if a leak occurs in one circuit, it won’t affect the other circuit, leaving at least two brakes operational to stop the vehicle. With most rear-wheel-drive (RWD) vehicles, cars, the hydraulic system is divided front-to-rear, with one circuit for the front brakes and a second circuit for the rear brakes. On many front-wheel-drive (FWD) cars, the brake system is split diagonally. The left front and right rear brakes share comprise one circuit, while the right front and left rear brakes share the other.

Generally, the brake master cylinder fails for two reasons: 1) a leak may develop internally and the seal goes bad, thus creating a lack of pressure when you press the brake pedal is depressed; 2) externally, a leak may develop occur at the main part of the seal where the push rod comes into the cylinder.

When replacing the master cylinder it’s possible that it may be that the brake booster also needs replacing. If a failing braking brake master cylinder leaks into the booster, it may cause the diaphragm to wear out prematurely or rupture. Brake fluid is quite corrosive, so as at this time we’ll also inspect the vacuum lines too the brake