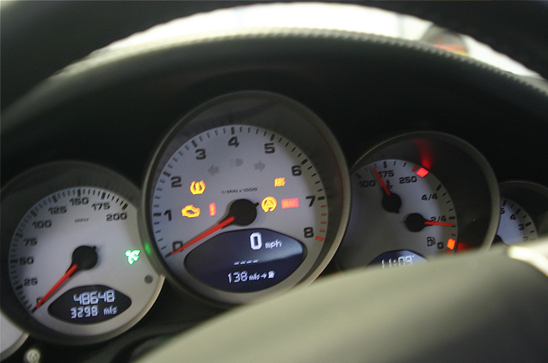 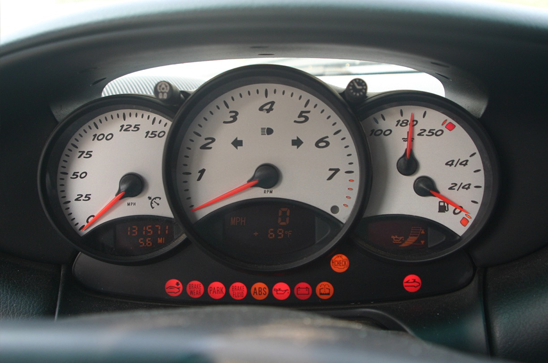 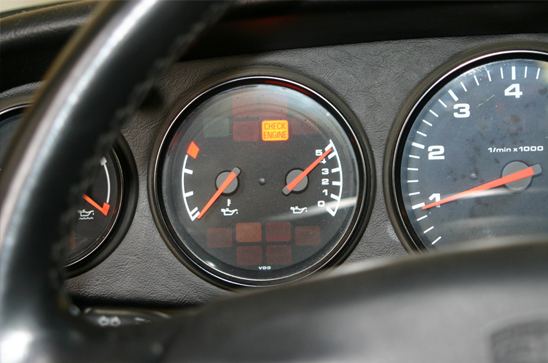 Porsche introduced the check engine light in 1989, and this
depicts the typical dash configuration from 1989 to 1998.

Is Your Porsche’s Check Engine Light On?

When to Drive It In, When To Call For A Tow Truck

Use of the check engine light (technology) or CEL, began with the introduction of the On-Board Diagnostics system (OBD) in 1987. In 1994 the more advanced OBD II was introduced. This system is a government mandated vehicle component that automatically checks and tests various vehicle emission control items. If there is something askew outside the normal parameters of your vehicle’s electronics, the engine light, when on, is simply telling you that your car has an item that may be malfunctioning or not performing correctly, and that ultimately may affect what is coming out of your tailpipe.

“If the check engine light is on but not flashing, you should get your auto inspected in a timely fashion,” says David. “However, if the light is flashing you should not the drive the car. You’ll need to have the vehicle towed to our shop.” A check engine light may be on or flashing for numerous reasons such as a bad cylinder, bad spark plugs, a bad coil pack, or a misfiring issue. Driving your Porsche with a misfiring problem could cause your catalytic converter to go bad by overloading it with fuel. The repair/replacement could be quite expensive.

Some check engine light issues could be a quick fix such as a loose gas cap. “Sometimes customers will come in and say, ‘Hey, my my little $39 scanner (bought on line) says it’s an O2 sensor issue,’” says David. “Now I could replace the O2 sensor but it may not solve the issue. There could be another problem that is mistakenly pointing towards the O2 sensor being the culprit. Another reason for a check engine light on could be the air intake sensor or something else that is causing that sensor to read faulty.”

Clearing the codes: Modderman Service technicians will scan then analyze the source of the light by doing what David refers to as “extended fault-finding with our shop’s PIWIS Tester II,” the most advanced diagnostic equipment in the auto industry. David says, “If it’s something simple, we just clear the code. Sometimes it’s just a temporary glitch in your car’s computer system that has caused the light to come on.” Most of the codes relating to the fault are government mandated and generic, with the exception of some manufacturer specific codes.

When your auto’s check engine light is on, the shop techs never assume it’s a big repair or a quick fix. “We just won’t know the until we perform our diagnosis,” says David. “Older vehicles as they age have their own particular idiosyncrasies, including the occasional engine light on alert. Newer Porches with advanced technology have their own set of issues. Again, by using our extended fault-finder along with with factory tools, we always get to the root of this and all other electrical predicaments.”

The one advantage of going to a Porsche facility such a Modderman Service is that technicians can sometimes read more detail into the codes that may be more common in a Porsche use application. “Whether it’s a classic Porsche or a newer model, we really have seen it all,” says David. 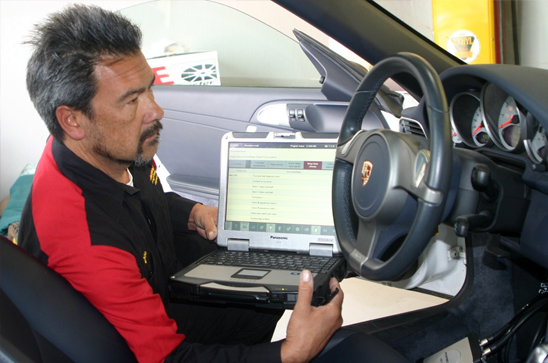