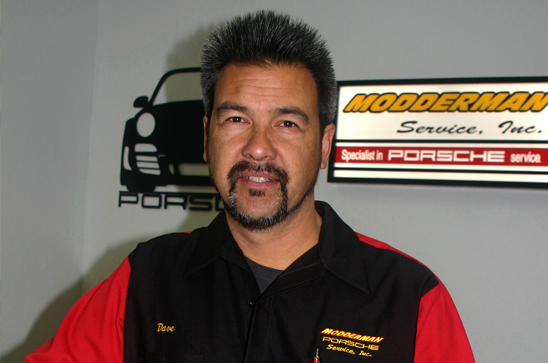 Owner David has been working on Porsches since 1985. As the shop owner and a Porsche specialist technician, David’s goal is to exceed your expectations, be it service, repair, advice, and customer relations. Outside of running his elite Porsche service and repair center, David spends quality time with his family, camping, and dirt bike riding.

He’s also enjoys his longtime coaching association with the Mountain View Little League where all of his children have played baseball for years. Ever the romantic on weekends, David and his wife may hit the winding country roads of the wine country in his or her Porsche as he tests his own road-handling handling skills.

When not at the shop, David travels the country as a crew member for a few different racing teams.. Competing in the Le Mans Series, David is able to take his racing knowledge and apply it to his clients’ autos, for enhanced performance and handling. 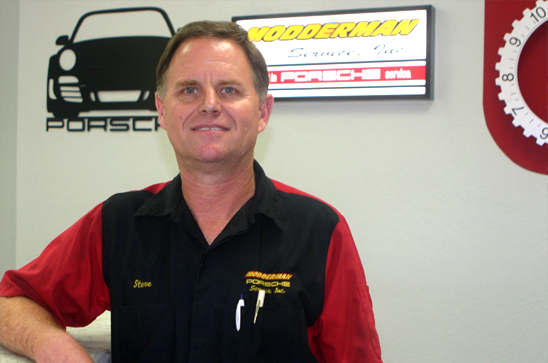 With over 20 years of exclusive Porsche repair and diagnostic experience at Modderman Service, Steve is often referred by Porsche dealerships for specialty repairs, including the new Targa and convertible models. Also known as an expert in electrical diagnosis, Steve routinely services the complex Panamera and recent turbo cars. Steve’s extensive knowledge of fuel systems from early 356 carburetor to the latest 991 and Cayenne computer-controlled fuel injection, further enhances his value to the Modderman Crew.

Whether your car is a Porsche 911 or a newer Porsche Boxster with an engine light on, Steve is “the man.” Say it’s an electrical issue, Steve will ask you questions so he has good information to work with. From there he’ll first check the most obvious; if it’s an older Porsche, he’ll look at wire diagrams.

If nothing else Steve is thorough and has dealt with almost all imaginable Porsche car problems, which can save you time and money. Away from work, and a man who appreciates “fast,” Steve enjoys tinkering and boating with his two classic flat-bottom speed boats. 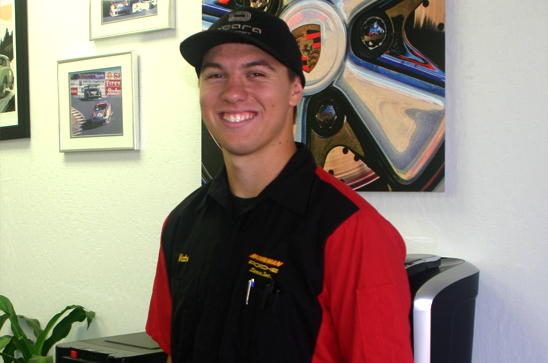 Continuing with the Modderman tradition of staying current with the innovations of Motorsport, Nate has been working alongside his father, David, and the rest of the Modderman Service team for the last year. Nate has made a name for himself crewing on various race teams, also while attending and studying automotive technology at Anza College,

While accompanying David during the racing season, Nate developed a strong interest in Formula One racing and aspires to be a Race Engineer. “I liked the people I would meet and the competition,” he recalls.

As an apprentice technician, Nate realizes he has a long way to go before becoming an all-around, expert Porsche mechanic. Nate brings a Generation Y vibe to the shop, understanding the newer Porsche owner’s requirements for modern technology and features as well as performance. “Today’s owner may understand the history but demands the technological input and feedback they get from other devices just as much as the performance,” says Nate. When asked about eventually becoming a third-generation Modderman Service owner, Nate says, “It’s possible at some point.” 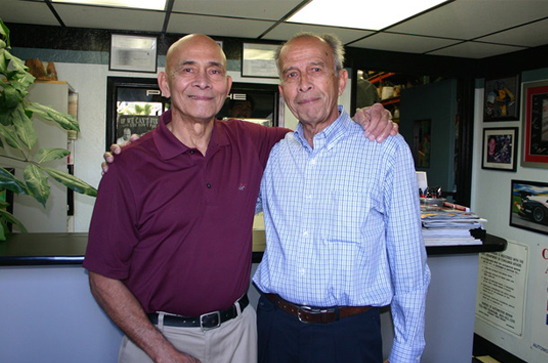 Born in Indonesia and later moving to Holland, Ron and his two brothers came to the U.S. in 1966 and settled in the Bay Area. Ron acquired a job working with dealership Gus Mozart Motors which catered exclusively to those seeking exceptional vehicles such as Porsche.

In 1971, his brothers Willem and Hans opened a gas and service station. The word was spread by Porsche owners as they were impressed by the quality and meticulous work the brothers performed.

With business steadily growing Hans and his brothers were inspired to open their own shop in 1974, Modderman Service, at the same Mountain View location where it still resides today. With continual growth, David, who had been around the shop his whole life, joined the crew in 1985 and thus began his tutelage of all-things Porsche.

By 1989, Willem felt it was time for new-life experiences and with David now up to speed, Willem offered Modderman Service to him. David, who in his father Ron’s eyes, is doing a great job keeping up the legacy of the Modderman name. This he can attest to as many of their original customers are still getting their car serviced at Modderman Service.

Today, Ron enjoys photography and motor racing with his son, David. He also volunteers for Little League and participates in walkathons for ALS. Willem has been spending time with his family, enjoying the tropics in Hawaii. Hans passed away in 2008. He is fondly remembered by his family, friends, and former Modderman Service clients as a kind man with a good sense of humor, and as one heck of a Porsche mechanic.